One of my favourite times of year is early to mid-June due in large part to peonies. This year it seems we have had a lot of rain and thunderstorms in June, making for a lot of floppy peonies. This picture was taken just a day before a heavy rain. By the next day all the largest blooms were on the ground despite the peony stakes surrounding the plant. The problem with peony stakes is they just don’t seem to be large enough to support the whole plant. Even after drying out in the rain, the blooms never look the same and the stems always seem to be a bit droopy. This year I have cut off many of the largest blooms a little early to help those side buds put on a nicer show. 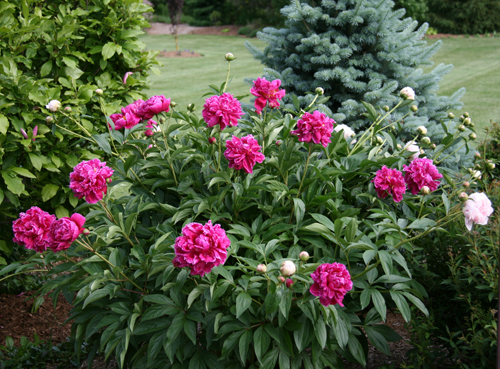 That leads to a question of whether to disbud or not disbud. Until this year I never really considered it and have never done so. I’ve just let nature take it’s course. Some cut the side buds earlier in the season to create one larger flower and help reduce the weight on the stems. However in a year like this one, I would have lost out on even more enjoyment from my peonies as I have extended the season a bit after having to cut back a floppy rain beaten center flower. Either way though, rain or shine, peonies are still one of my favourites.