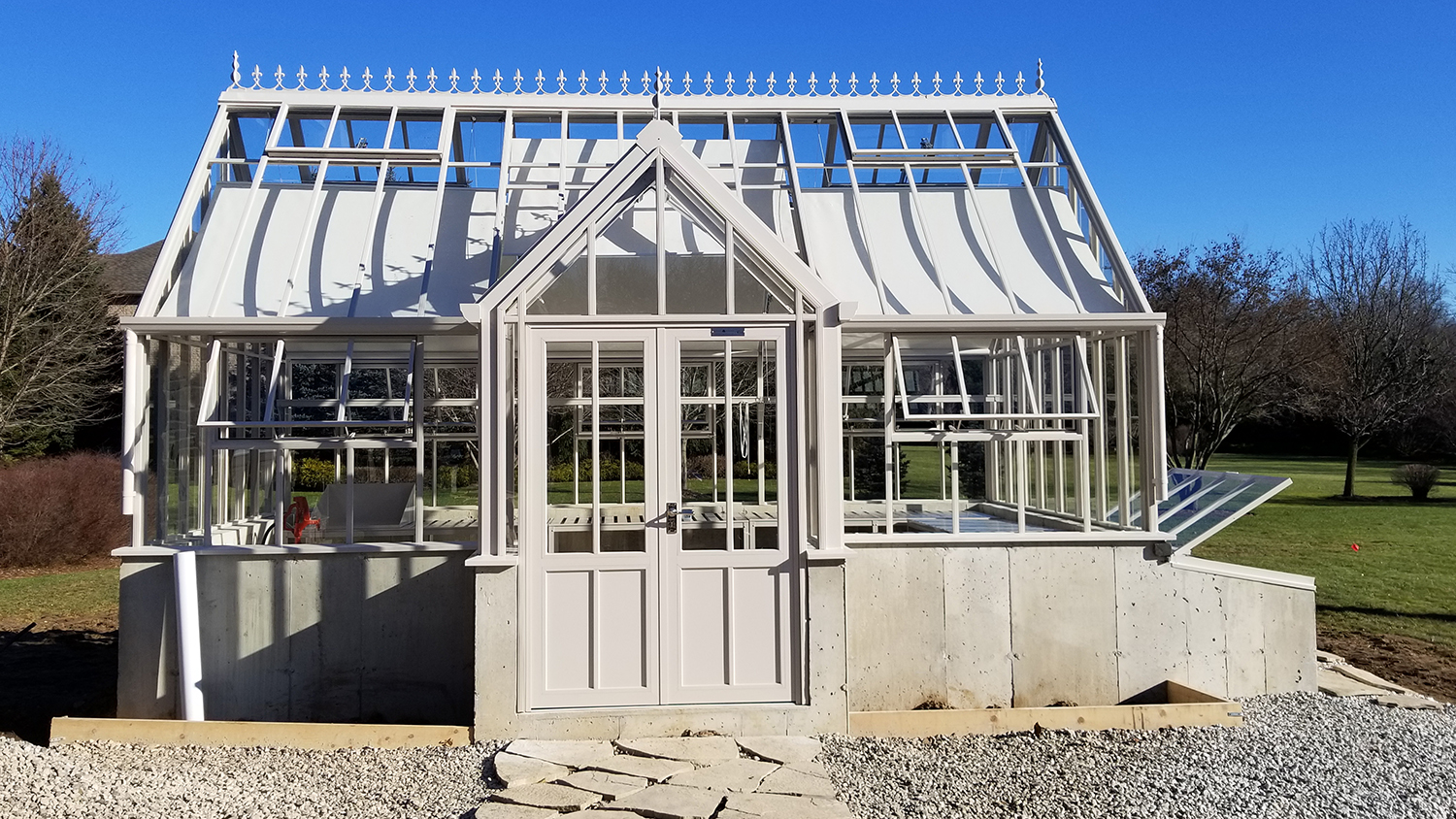 Let me start off by saying I love my new Hartley Greenhouse. It’s a dream to have something this beautiful and yet, for me, functional. I still have some finishing details – brickwork which could not be completed before winter arrived and landscaping – but the main structure is up and it’s lovely.

So how did the process go? I’d have to say some smooth sailing and some bumps in the road. Here’s how building our Hartley went.

Not surprisingly, this went pretty smoothly.

The final decision to make this big an investment was partially driven by covid. Like many, our priorities changed as a result of spending so much time in lockdown. Lucky for me, we have a beautiful 2+ acre yard which I love spending time in. Prior to Covid we thought we would spend some of our retirement split between a condo in the City of Toronto and our country home. Covid changed all that. We learned we were just as happy spending more time relaxing in our yard. We decided to make it our vacation property, our cottage and our home all rolled into one. Best of all, no packing, no travelling, and no caring for two properties.

So, in March 2021 I reached out to four high-end greenhouse companies, two in Canada and two in England. While I know they were likely busy with inquiries, the only company I even heard from was Hartley Botanic.

Dan Barry – my sales rep – was fantastic. He sent plenty of information to help me make decisions and the ordering process was crazy easy. I had a signed proposal (aka contract) by early April. Bear in mind, I’m a quick decision-maker which helped. Please note, I’m not going to talk about the cost and payment process. Suffice it to say, a Hartley is expensive. I knew that going in so have no complaints whatsoever on that part.

I’m also happy to say that Dan’s help didn’t end once I signed the contract and paid my deposit. Throughout my build, he was my ‘go-to’ for information. Any time I had a question, I got a quick response with pictures and ideas to work from. As a team, everyone at Harley was both knowledgeable and happy to provide advice. The trick though was to know what to ask!

Even though I was able to order my greenhouse in less than a month, build and delivery takes a long time, and covid lengthened this period. Hartley was dealing with higher demand, and at the end, which you’ll read shortly, they also had some logistical issues. The original delivery and install date was scheduled for November 15. A call from Hartley meant a delay to November 30. Not bad but unfortunately, the installation was delayed a third time (with much stress on my end) until December 13, 2021.

So ten months from request to installation. If you are thinking of building a high-end greenhouse, you can expect the process to take at least this long, maybe a year now since I know they are even busier.

What you are buying from Hartely is the glass top and frame. In my case, I was also ordering installation by the Hartley team.

You are, however, responsible for having the base built. My only comment would be that, while Hartley answered all my questions along the way, it would be helpful to get some more tips and suggestions early in the process. They provided blueprints (which you must sign off on) but I still had a ton of questions regarding materials, tolerances, and more concerns that came up during the build, particularly around how the brick would meet the frame, heating ideas etc. Hartley provided documentation, but only after I asked. Their assumption is that you and your builder should know these things, but with something so specialized, that’s a bad assumption.

I also had a somewhat difficult time making my contractor understand that this was not a typical base like you would put down for a garage. If you are working with a contractor, make sure they fully understand they can’t make ‘assumptions’ and must follow the blueprints exactly. We had a few hiccups along the way. Easily solvable, but still stressful. For example, the foundation guys decided to pour the floor of the cold frame as a solid slab since, in their eyes, the space in the middle was narrow. A bit of a problem for water drainage to say the least! Because I was dealing with brick issues, I didn’t see this until it was poured. No problem, we put in drainage holes along the sides, but still, following the blueprints would have avoided the need for this fix. Next, they poured the door foundation sloped like you would a house. Again, you can’t see this until the concrete plates for the walls are removed, however, it’s not how a Hartley works. The door floor should be flat, so that required another fix. Lastly, they missed the slope of the cold frame required a third fix. Again, basically, they didn’t follow blueprints exactly so make sure you make this clear to your contractor. (PS we like our contractor, he’s done work for us before and I’d recommend him again. I’m not sure how much of this was just because everyone was so busy that they tried to work too quickly, not paying close enough attention along the way.)

Logistically, we also had a few issues to deal with during this phase of the project. Lucky for me I think well on the fly. Hopefully, you do a better job pre-planning.

The location was wide open, but near our house and, after almost 20 years living here, our yard is pretty well landscaped. Bringing in large equipment would have ruined too much of our established yard and gardens. The excavator was able to come up the side yard, limiting the damage, but cement trucks were a no-go. So that meant bringing in a pumper truck. Needless to say, the local kids loved it and truthfully it was a very exciting day.

Next, I had to make a decision regarding backfilling the inside. I am not planning on growing on a soil floor in the greenhouse. My intention is to use the greenhouse for seed starts and plants in pots. I even ordered staging from Hartley for this purpose. Still, how should I fill the inside of this big 20 foot by 11-foot hole? In the end, I decided to backfill partially with excavated dirt (to save money), then bring in 20 inches of clear stone and 6 inches of pea gravel. Pea gravel would look nice and the deep stone base would drain well. But, how was I going to do this without making a huge mess of our yard? Easy (but expensive) we used a blower truck! After stressing about how to bring in 20 yards of clear stone and another 3 or 4 yards of pea gravel, I remembered the company that blows in our mulch each year. So a call to Gary at LandSource Organix confirmed they could blow in the aggregate.

Simple, neat, and perfect. And the outside aggregate will work as my patio and working area until the landscapers can finish.

Those are just some of the decisions you’ll need to make. I really should have put more thought upfront into some of this but lucky for me all worked out in the end.

As I said, our original glass structure was supposed to be delivered and installed beginning November 15. I was totally understanding when they called in October to delay to November 29. Covid was running havoc with supply chains and shipping after all.

However, the second delay I was not so happy with. Not so much the delay itself, but the lack of communication from Hartley.

So here’s what happened.

On November 28, I got a call that the team was on the way but my greenhouse was ‘stuck in customs’ through some crazy idea that customs called me and I denied knowledge of the delivery. Clearly, if customs called, they called the wrong number.

Not to worry the logistics guy from Hartley said, it would be released and on its way and would be there Monday afternoon. Well, Monday arrives and no greenhouse material, or installers. I called. Sorry, it’s still in customs, they were on it and it would be here Tuesday morning.

In the meantime, I get a customs notice to pay some duty on a shipment. Hurray, my greenhouse is coming! Nope. Tuesday arrives, no greenhouse. And it turns out the customs notice to me was for some other parts which will arrive Friday. Huh? That doesn’t make sense.

So Tuesday I send an email, can you explain what’s going on. Where is my greenhouse? Next thing, I get a call from the US President of Hartley with a ‘proposal’. My greenhouse would arrive Wednesday AM, but the installers would come back in two weeks – December 13 – to begin the installation. Needless to say, I didn’t feel I had an option. And the stress of not knowing what was happening was overwhelming, to say the least.

And it turns out, what was also happening was that all the sections for my greenhouse were not in the original delivery. The windows, vents, and staging material were not ready and were being shipped separately. Yet no one from Hartley decided to tell me this. I found out from the installers when they offloaded what did arrive the original install week. Apparently, if the main glass structure arrived on Monday, November 29 as planned, they would have begun installation but then left me with an unfinished greenhouse to come back who knows when!

Even dealing with the missing pieces was a nightmare. These parts were supposed to be shipped that week but took repeated calls on my part to figure out when and confirm delivery. It took three shipments, with the last one finally arriving on December 10.

So long story to say that Hartley’s logistics was pretty disorganized and their communication when issues arise was even worse.

However, on December 13 one installer showed up. The second installer did not arrive until the end of the next day due to covid test delays, which was not their fault but almost too comical and a sign of just how glitchy this whole installation was going.

OK, so the greenhouse parts were finally here (all of them) and the installers began.

I’m happy to say, this part went very smoothly. The installation team was awesome – thanks Micah and Alex!

Also your responsibility in the process is how to bring water into the greenhouse and how to heat and light your greenhouse. I decided on three things:

At the end of the day, despite some of the drama, I couldn’t be more pleased with my greenhouse. It’s beautiful and I can’t wait to start some seeds soon. We still have a bit to complete. The brickwork will need to be finished in spring and the landscaping won’t get completed until next fall. Covid has kept good tradesmen very busy but I’m happy to wait. That’s just aesthetics, it won’t stop me from using my greenhouse.