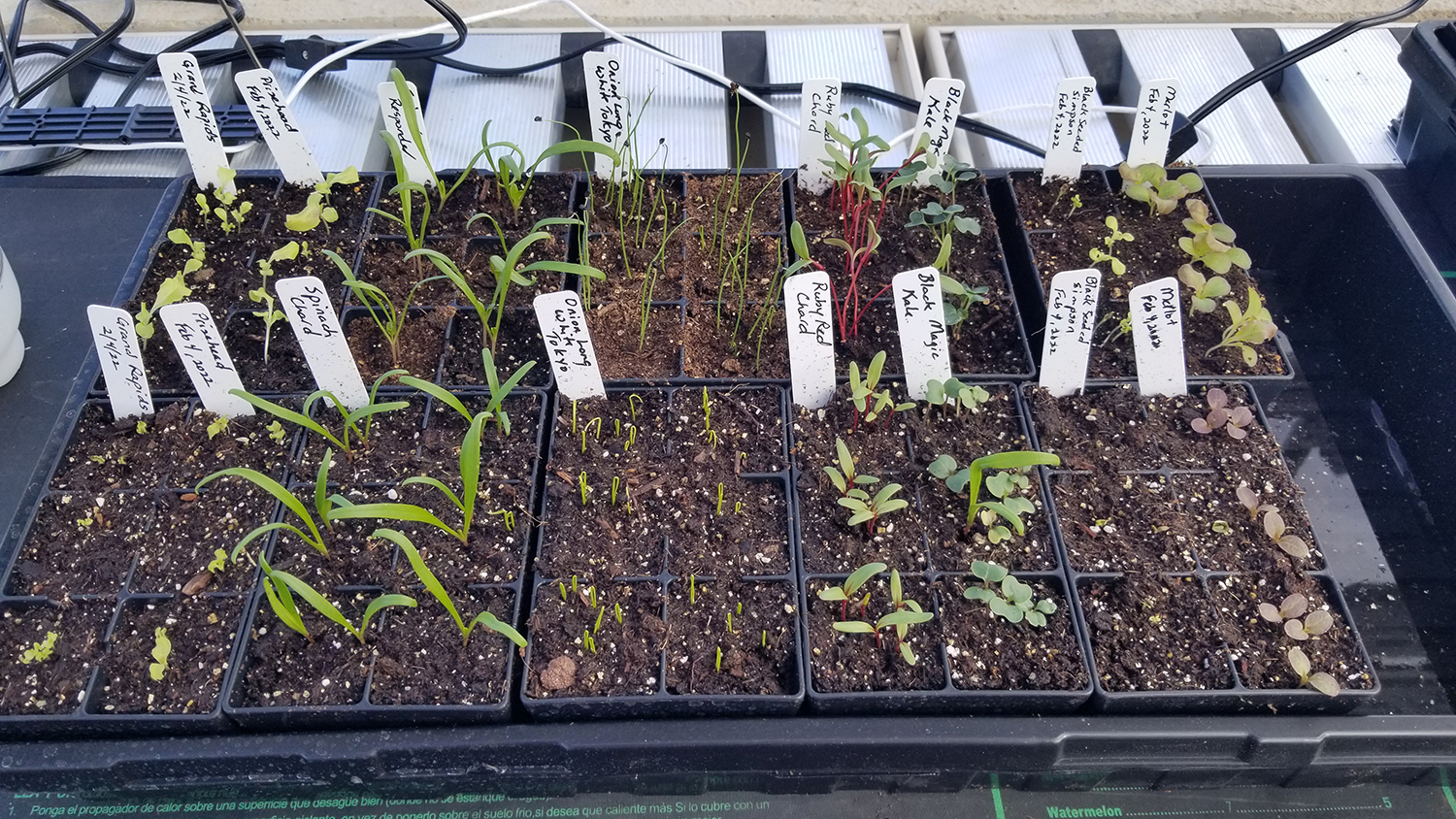 In past years I’ve done all my seed starts from February through May in a small setup in my basement. Now with a new greenhouse, I have room to grow, quite literally. The question is, how early will I want to turn on the heat in the greenhouse? We live in Zone 5 Ontario and while the average low in February in our area is around -9C, it’s not unusual for us to have days running at -20C or colder.

My goal is to start some cool-season crops like lettuce, swiss chard, spinach and green onions as early as I can and transfer these to the cold frame by early March. It doesn’t make sense to put out new starts much earlier than that since there won’t be enough natural sunlight to create good growth until then.

However, I still had questions:

So on February 4, 2022, I began another greenhouse experiment. I started two sets of identical seed starts. One set I’d germinate in the greenhouse on heat mats, the second in the basement.

What seeds did I start?

One set was placed in the basement to germinate. Our basement is warmish in the day (18-20C) and cool at night (14-15C). I added a heat mat underneath.

The second set was left in the greenhouse. These were also on a heat mat and covered by a humidity dome every evening to raise the ambient air temperature at night. Recent heat experiments proved I could raise the temperature by 10C at night this way around new seedlings.  I removed the humidity dome in the day to offer maximum natural sunlight to newly germinated seedlings.

The first seeds that germinated for both sets were the Merlot lettuce. I saw the first signs of germination on the basement seeds within 2 days. In the greenhouse, germination began by day 4. I was surprised at how well the greenhouse starts did. It was substantially colder at night, reaching lows of around 4C yet germination only took 2 extra days.

The picture at the top of this post was taken on February 15, 11 days after sowing. At that point, I moved both sets into the greenhouse. The seedlings at the top were started in the basement. On day 11 the basement seedlings were a little taller, but also leggier.  The seedlings started in the greenhouse are a little behind but not significantly so. However, they are much stockier which will make for better transplants. In both situations, everything germinated.

So what did I learn? You can get lettuce, chard, spinach and onions to germinate as long as daytime temperatures are warm enough. Even nights close to zero will not harm young seedlings.

So the choice comes down to economics and preference. Clearly not turning on the greenhouse for 3 extra weeks and starting my seedlings in the basement will save on heating costs. However, I can moderately heat my greenhouse and put it to good use.

In addition to this experiment, I sowed a tray of pansies. These fully germinated in the cooler greenhouse as well. In all likelihood, I’ll start my greenhouse in mid-February and make maximum use of the space. I don’t see a lot of point in setting up an indoor germination station in my basement for one month. I built the greenhouse to enjoy it, so enjoy it I will.