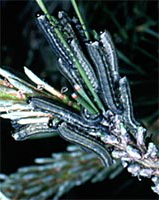 I discovered another bug to contend with this year. Just as my mugho pine were putting on their new growth and I went out to clip back some of the candles I discovered these 1 inch long grey-green striped caterpillars with a small black head in masses throughout the pines. It was clear that they had started stripping the needles off many of the pine branches. Not knowing what they were I decided to immediately cut out the largest batches and dunk the branches in soapy water. That of course was after I had fun watching them pop up into straight lines like fingers snapping outward every time I touched the branch they were on!

A little research that evening and I discovered these were European Sawfly larvae. While they look just like caterpillars they are actually larvae of wasp-like insects. Larvae hatch in early May from overwintering eggs laid in the pine needles. Young larvae eat the outer portion of the needles leaving the rest to dry and die back to the branch. As the larvae grow they eat in bunches, starting at the tip of the needles eating downward. They can completely strip a branch bare of it’s needles. Interestingly they apparently only eat old growth so the plants usually survive but can be severely deformed. 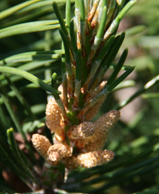 European Sawfly are common in Southern Ontario and usually attack Mugho, Scotch, red, Jack, and Japanese pines. It will also occasionally feed on white and Austrian pine. Unfortunately as these little buggers are not really caterpillars, Btk does not work so hand picking or cutting out the worst offenders is the only way to go. Next year I will check a little before the growth starts on my Mugho pines.

About the same time I found some egg shaped deposits on the same pines. They were eggs shaped but sent up an almost spore like powder when touched. I haven’t discovered what they are yet but chose to cut all of those out as well.