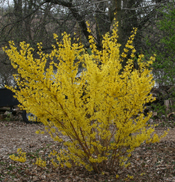 The forsythia have been in full bloom for about a week now, brightening up the spring garden. Sunny yellow blooms of the forsythia are not the only reason to have this shrub in the garden however. Forsythia can be used as an indicator plant for the eastern tent caterpillar.

Indicator plants are often used to look for a particular pest and manage it in its most vulnerable stages. Forsythia or saucer magnolia are often used as harbingers of the arrival of eastern tent caterpillar larvae. And sure enough, just as my forsythia and magnolia were in their early blooming stages, small tents started to appear in my crab apples. The eastern tent caterpillar is a native pest that particularly likes crab apples, cherry and similar fruit trees although it will attack a wide range of trees and shrubs.

When the forsythia are in early bloom, the eastern tent caterpillars young larvae are at their most vulnerable and easier to control. Right now the larvae are less than 1cm or 1/4 inch in size. They will eventually grow to about 2 to 2.5 inches and can, if left alone, completely defoliate a small tree or branch on a larger tree. While small infestations will not likely cause significant harm, continued annual return and defoliation will definitely weaken the tree. That is why I watch for the forsythia and start the control process early. Control of the eastern tent caterpillar is three fold: