In the science fiction book ‘The Day Of The Triffids’ plants eat meat, walk around and end up attacking everyone. Well I wish the plants in my garden could do something similar to the aphids attacking them this year. Populations are quite high already this year with almost all of my summer blooming Spirea showing aphid infestations along with my Burning Bushes and my Sutherland Gold Elders. All of the areas attacked were fresh new shoots, candy for aphids. 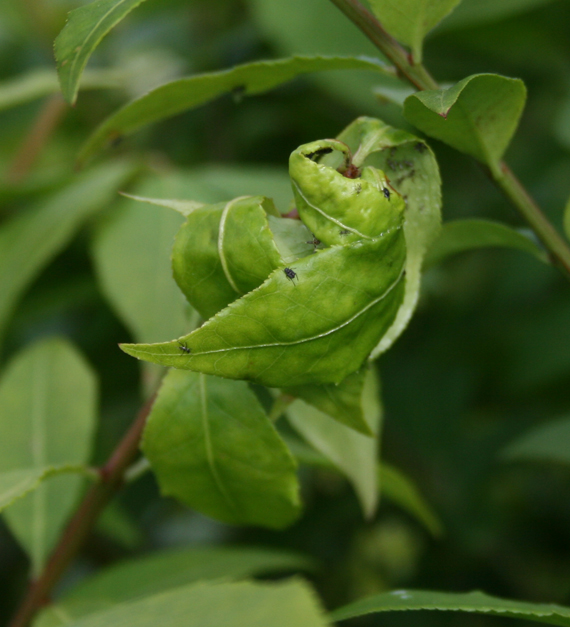 Conditions that favor aphid population growth are cool temperatures, plant stress, particularly drought stress, and a lack of aphid predators. This spring has been fairly cold, especially at night which I think has contributed to their abundance. In optimal conditions a single aphid could produce 600 billion descendants in one season! Well, they are well on their way this year.
To combat these pests I mixed up a batch of home-made insecticidal soap:

Insecticidal soap works on contact. The salts of fatty acids penetrate the insect’s exoskeleton causing the insect to become dehydrated and quickly die. The soap is effective only when wet. Insectidical soap must be sprayed directly onto pests so use a sprayer strong enough to spray up in order to get at the underside of the leaves. As you can see from the picture of the damage on my Burning Bush the leaves curl when damaged so you need to get right inside the damaged area. Another thing to remember is to check back the next day or so as populations quickly repopulate sprayed areas. In the top picture some new live aphids appear among their deceased brethren.

In addition to spraying with insecticidal soap, I also cut back branches with sever infestation or damage. Now if mother nature would just bring a good thunderstorm to help beat back these nasties that would be great!