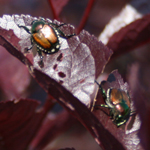 We are definitely approaching the peak of the Japanese Beetle season. In our area, just north of Brantford, Ontario adult Japanese Beetles start appearing in early July but their peak season is from around the last week in July to mid-August.

The Japanese Beetle is a serious problem for both turf and ornamental plants. Grubs feed on the root system of the lawn while adult beetles feed on the foliage of over 300 species of ornamental plants. In a bad year, left uncontrolled, adult beetles can completely defoliate some shrubs. Unfortunately Japanese Beetles are here to stay and with our Ontario pesticide ban, good cultural practices are your best defense.

Hand Picking: By far your best method of control is hand picking. Adult Japanese Beetles are attracted to each other by pheromones, in fact you will often see them clumped together on a leaf. The adults are most sluggish, and easiest to pick, in early morning or late evening or on cloudy days. They can be destroyed by dropping into a container of soapy water. Place your hand or container below the beetles as their natural instinct is to ‘drop’ when attacked. I walk my garden, focusing on the more attractive shrubs in my garden, two to three times a day hand picking. It only takes about 10 minutes each time but significantly reduces overall damage.

Biological control: At present, most parasitic control methods for Japanese Beetles attack the insect at the grub stage. The most popular are milky spore or nematodes. As we live in the country with over one acre of lawn I do not bother with any methods to specifically control grubs. While there has been a lot of chat about milk spore and other organic methods, with one acre of lawn this is just too cost prohibitive. I do however follow other good organic lawn care practices to otherwise encourage a healthy lawn. In particular I cut my lawn at a very high mowing height. This encourages both a deeper root system and helps maintain moisture, helping the lawn to recover from any grub damage.

Habitat manipulation: You can often reduce the amount of Japanese Beetles present in your yard by making the habitat less attractive to the them. This includes planting both pest resistant plants and controlling the size of more attractive shrub species. This past year I have removed a few shrubs from my gardens that are very susceptible to insect damage. In particular I have removed some roses which, in addition to being prone to black spot, are Japanese Beetle magnets. I also plan on removing a Red Majestic Corkscrew Hazel which is almost completed defoliated every year despite hand picking. Japanese Beetles also love Purple Sandcherry (Prunus x cistena). I have found a benefit to cutting back my Purple Sandcherry shrubs to a height of no more than 4 feet. This has significantly reduced the Japanese Beetle populations attracted to these shrubs as well as making hand picking much easier. Here is a link to a great resource that ranks the relative susceptibility of woody plants to adult Japanese Beetles.

Diseased and poorly nourished trees and plants are especially susceptible to attack by beetles. I have a clump birch tree in my yard that was planted before we moved here that has been severely attacked by both leaf minors and Japanese Beetles every year and is largely defoliated by mid-August. Yet my neighbour has the same tree just a few hundred yards away with no issues. Next year I plan on starting a regimen of dormant oil early in the spring to see if I can save this tree. If not, quite frankly it will be coming down to be replaced with something that is more pest and disease resistent.

Traps: Traps using pheromone lures to attract and trap Japanese Beetles are heavily advertised and pushed by the garden center industry. These traps were originally designed to survey Japanese Beetle populations, not to be used for insect control. They are not recommended unless special conditions can be met. The traps have been demonstrated to be effective in reducing damage and populations only when landscapes are isolated from Japanese Beetles coming from nearby areas or when everyone in the neighborhood is using them. In most areas, traps tend to attract more beetles into the area than would normally be present. I also find that many people put these traps up in early June but then get tired of cleaning them out, thereby attracting more Japanese Beetles to the area and to nearby ornamental shrubs.

Bug Juice: I have read a lot about spraying plants with the juice of decaying dead hand picked bugs as a deterrent. I have tried this once this year on the above mentioned Red Majestic Corkscrew Hazel but did not see any noticeable difference. Now I will admit we received a heavy rain two days after spraying so I will try at least once more but so far I’m not convinced.

Unfortunately the Japanese Beetle is, for now, here to stay. It is definitely for me the most time consuming insect control area for my garden but I’ll keep at it, slowing reducing the susceptible plants in my yard as I need to.