Living around the Kitchener-Waterloo area in southern Ontario we have a decent gardening season, but most years you can’t reliably plant vegetables outside until late May and most produce is finished by late September. I’ve read a lot about year-round gardening and have, with limited success, been able to extend our harvest with row covers and light plastic covers. Generally this buys a couple of weeks at either end of the season and not much more. So last fall I decided I needed a larger, more permanent, coldframe.

Well perhaps I got carried away because what I ended up with was more of a mini-greenhouse. It’s more than a coldframe, less than a greenhouse. Finished too late last fall to do anything at the time, this spring begins our inaugural launch into year-round gardening (or close to it anyway).

Today I planted my first cool season crops directly in the soil in the bottom of the coldframe. The morning started out below freezing with snow on the ground. But by noon it was sunny and the temperature outside was a balmy 5 degrees celcius with no wind. Perfect weather to get started. If this works, I will have planted seeds a full 5 weeks ealier than I have ever before, and 7 weeks earlier than normal. Not bad.

Planting was easy. I made a grid with string, planting different varieties within each grid. Later season in the middle, early season near the front for easy picking.

I decided to start with the spring vegetable basics: spinach, lettuces, radish, beets, pak choi. I also tried some broccolini since I find our cool season is too short if I wait until I can plant these in the garden. I chose not only cold season vegetables, but those that would mostly mature within a 30 to 50 day time horizon. Those with a 30 day maturity will be eaten and removed in time to make room for summer starts like cucumbers and zucchini which don’t take a lot of time from seed to transplant. And by the time we are eating the later maturing varieties, my hopes are to have a second sowing already under way in the main vegetable garden. I’ve included a list of the varieties I’m trying this first season at the bottom of this post if you are interested.

I decided to build the coldframe up near our house, so I’m lucky I have easy access to water. I added a quick connect to the tap on the side of the house and can carry a short hose and wand for watering. Here is everything planted and watered, March 19, 2017. Now we wait. 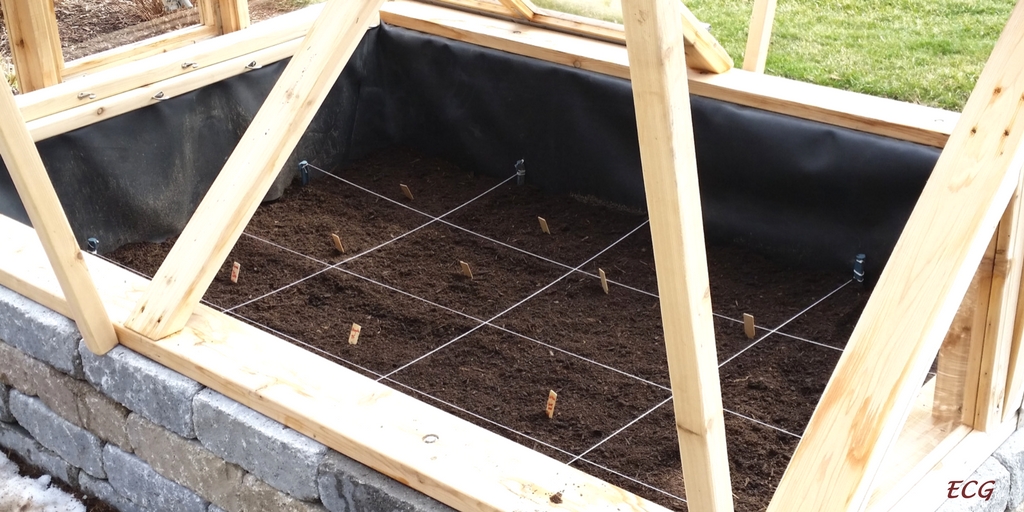 Beets – First Crop (45 days, planted close as some we will eat as greens)